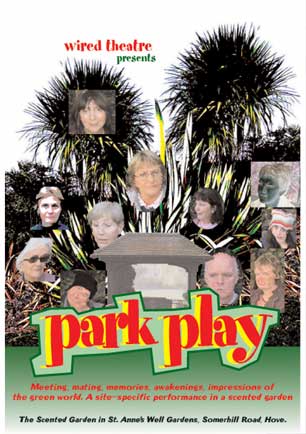 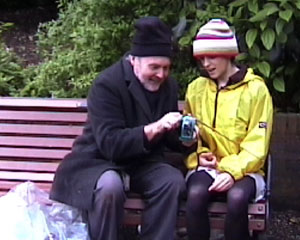 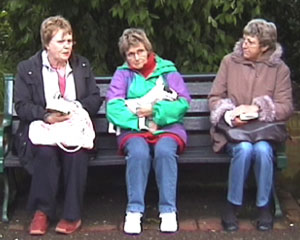 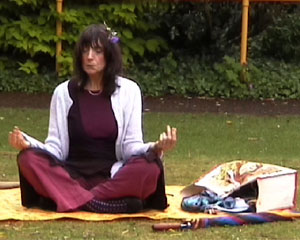 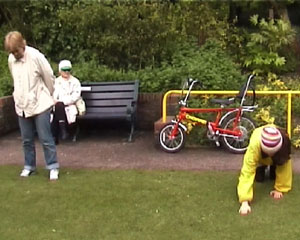 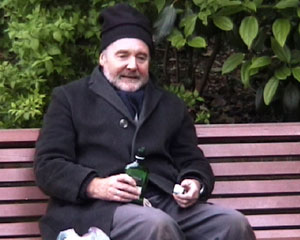 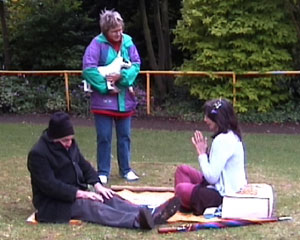 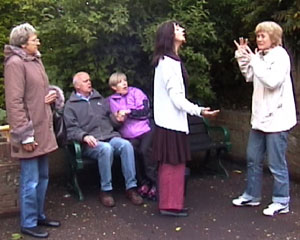 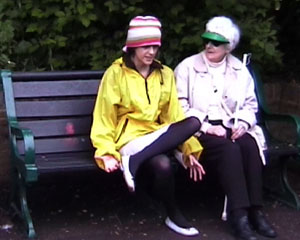 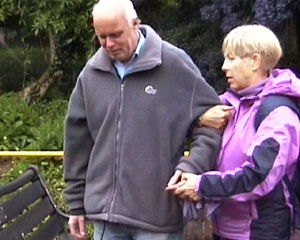 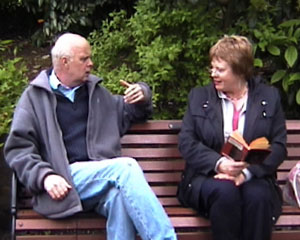 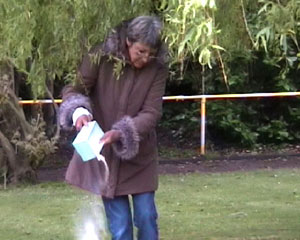 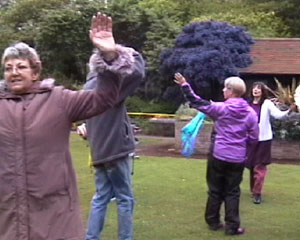 Park Play, set in the Scented Garden of a popular Hove park was the second site-specific open-air performance staged by WIRED THEATRE. The piece included ten actors, live music and the recorded voices of many people who have visited St. Anne’s Well Gardens over the past sixty years. Spectators were invited to wander freely around the fragrant space – glimpsing meetings, listening to conversations, watching games. Perhaps they would recognise faces, recollect memories and join in and play.

The performance was based on people’s real experiences of being in the park. Yet ordinary, everyday activities, which seemed straightforward became strange, sad, ridiculous within the green natural world of the park. There were so many unanswered questions …….Who is he…? How do they…? Where is her…? What does he…? Why does she…?

The move to St Anne’s Well Gardens seemed like a natural progression from WIRED THEATRE’S trilogy which was set in the house and garden of 12 Nizells Avenue.

Wired Theatre performed their annual play for the Brighton Fringe Festival in the public park adjoining the house and private garden in which previous plays have been performed. Instead of activities in different rooms with an audience perambulating up and down stairs, meeting surprises in each room, this year the challenge was greater and made greater still by the atrocious weather. Equipped with umbrellas, audience and players moved across a challenging space some forty yards or so long by twenty five wide, but this time performing simultaneously at various points on the grass and around benches on the rectangular path at the edge.

This raised problems of focus for the audience, for the actors and, of course for the director, Sylvia Vickers. The audience had to choose where to stand and move at particular moments and the actors when to speak up, raise or change their physical activity to attract the audience across the space.

It thus provided the director with an opportunity in a different unconventional space to disturb an audience’s desire for a settled relation with the actors, and for that matter to disturb the actors’ accustomed address of an audience directly in front of them. The audience, in fact, was not an audience so much as a number of disparate groups moving in different directions and interested in different activities.

This was actively encouraged at the entrance gate by each of the audience members being given photos of a different actor to follow and focus on. There was generally, however, a central focus of increased dramatic activity, where one group of characters took over – often by raising voices – from another.

The actors had spent time one would imagine by establishing their chosen characters – a tramp domiciled on a park bench; a young girl with a violin player who prowled around the edges; a blind lady sitting in the park to enjoy the scent of flowers; an educated woman wanting a quiet read of her French novel; a chatty and less educated lady wanting to know what she was reading; an inquisitive and lively young teenager trying to imagine what it was like to be blind;

an older and mentally handicapped gentleman who embarked on various hilarious forays across the grass; his worried carer; and a lady who liked to read the runes to all the passers by, when not engaging in occasional gymnastics.

One can imagine the forms of improvised encounters in rehearsal which then needed to be organised into a coherent performance.

The audience moved around in pairs and groups from one encounter to another, accepting the rain and wondering what and where things would happen next. One admired the bravery and experimentation. The actors were on stage and sustained their characters throughout, though not necessarily remaining the focus of attention.

The audience became engaged in imagining lives that go on around us and often do not notice due to our common propensity to forget that things go on all the time behind our backs which are likely to make fools of us. We, interestingly, found ourselves throughout in the centre of the space and at the end of the show were fooled by actors and director into becoming, waving umbrellas and all, performers in it. The incorporation and disaggregation of the audience was not the least experimental aspect of a very imaginative show.