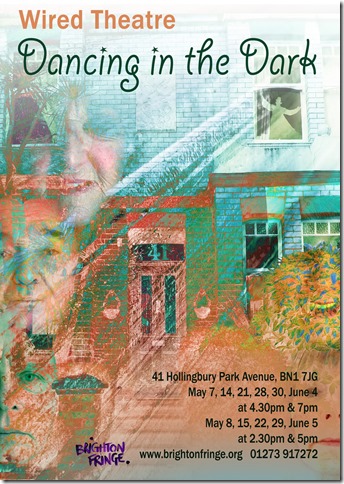 Dancing in the Dark

This popular Brighton based company has created original promenade performances in the Fringe for many years. Their new, lively production is staged in a welcoming house with a charming garden, offering visitors the opportunity to enjoy the surroundings. But old resentments and unfulfilled dreams lurk in the shadows and when uninvited guests appear, domestic tranquillity erupts into family mayhem. This sparky site-specific comedy challenges familial roles of sibling power and maternal love.

“Fringe theatre is often the preserve of the young. Brighton Fringe regulars Wired Theatre are an older company, and deserve to be valued more widely.” The Stage 2015

The performance continues the company’s policy of making pieces in non-theatrical spaces. Apart from productions staged in a derelict basement, an art room, a café, church and local park, most performances have taken place in houses, i.e. maybe murder, Get Up Those Stairs, Ah Yesterday (2003/04/05) at 12 Nizells Avenue, Hove; Look Now (2007), Above Below (2010), After Money (2011) at The Regency Town House, Gone But Not Forgotten (2012), Come Unto These Yellow Sands (2015) at a house in Poet’s Corner and All Found and up for Action (2014), St Barnabas Vicarage, Hove.

WIRED is known for taking risks, but “provided you concentrate – you’ll be treated to an experience unlike any other in Brighton.” Brighton Guru 2015