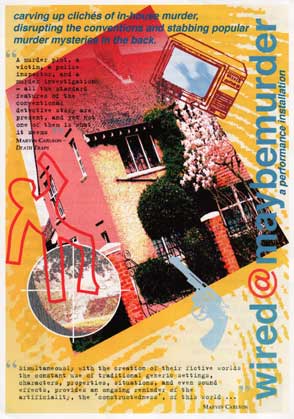 Maybemurder was a performance installation, consisting of video material and live action which audiences were invited to view in a promenade around the house. This show continued the group’s policy of developing performance in non-theatrical spaces; it raised questions about the conventions of popular murder drama on television and the strangeness produced by actors invading private domestic locations. Using the backdrop of a real house for a TV thriller challenged the house owner and audience to imagine other scenarios and actions than those seen on the screen. This was the subject of maybemurder.

For an hour or so a small audience is taken through the various rooms of a private house, watching a series of disjointed scenes which they are invited to piece together into the police melodrama which is shown fragmentedly on video at the beginning and with explanatory continuity at the end. In between, sections from the melodrama are played in the various rooms of the house in an ingenious way, exploiting their variation in content, size and function: small study, large kitchen with a useful table, sitting room with armchairs for cover, a hall with mounting stairs and a back garden where characters are spied upon and perform behind and under trees. Each space afforded opportunities for a strong dramatic imagination, innovatively used by cast and video and of course, stage director.

The change of location also involved careful and unobtrusive shepherding of the spectators who where drawn by noises into the different spaces but were not otherwise drawn into the action. The actors played in a caricatural style for the most part, exaggerating and satirising the formal conventions of the popular TV police murder mystery. Characterisation was therefore comedic and flat. But there was a much more serious aspect to the production. The play’s undoubted success not only depended on the suspense of not knowing the outcome of the story; it also raised questions about the flatness of its own genre and the nature of its psychological appeal.

Contemporary media and audience fascination with murder, sex and violence makes us ask awkward questions about the nature of our culture and of the individual psyches which form and are formed by it. Hence the simple video story which I took to be a deliberately unsatisfactory final ‘explanation’ of a Brechtian kind, does not fully explain, when it suggests, for example, that the characters’ motivation is only to pull the wool over others’ eyes, the disconcerting elements of cross-dressing which the live performances contain. These suggest at times a schizophrenic who speaks in male and female voices because his/her identity is fragmenting. The character ‘murdered’ may therefore be an aspect of identity, a voice and not an integral person. Such a possibility digs deeper into reality than the superficial genre explanation ultimately given. Should an audience be let off lightly in this way I wonder?

A live performance, acted out within feet of the spectators, could be too disturbing to take if it had not made its intriguing appeal by heightening the style. This semi-Brechtian device prevented the audience from switching off and encouraged it to think about more than who the murder victim was and why she/he might have been killed.