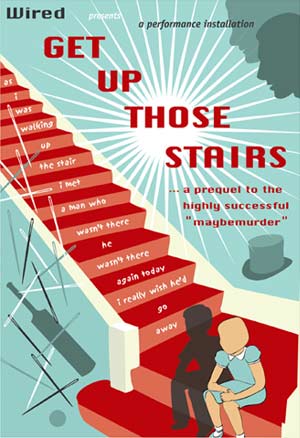 A review by Tim Chilcott, MA, DPhil, formerly Dean of the Faculty of Arts and Humanities at University College Chichester. 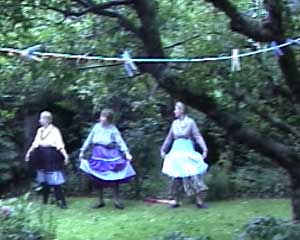 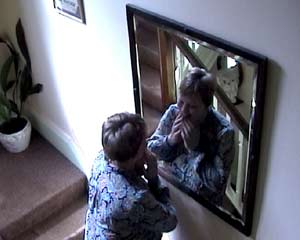 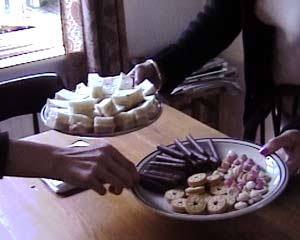 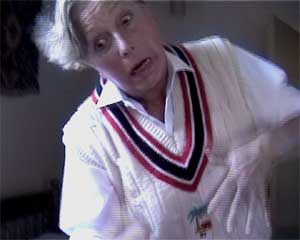 Get Up Those Stairs is a fascinating piece of performance art that both excites and disturbs. The setting is the upstairs of the house in which the director, Sylvia Vickers, actually lives. But this is no evocation of quiet domesticity. The stairs, landing, bedrooms and bathroom are not simply familiar spaces that the audience is invited to enter as the performance unfolds. The rooms begin to be filled with a kaleidoscopic, multi-layered past, as the history of a previous family who lived in the house is brought to life. That history – part real, part imagined – mingles with what may be fragments from the director’s own life, with memories and words from the four actors we see, with appeals to ancient rituals such as beating wordless rhythms with the hands, with repetitions of haunted phrases like ‘Daddy’s little girl’, ‘the devil you do, the devil you don’t’, ‘it’s not her fault’, ‘it’s smelly…nice smelly’. The result is a world that can leap in a moment from the realistic to the near-hallucinatory.

Such shifts of mode would be disturbing enough if the four actors concerned were on a conventional stage some little distance from the audience. But they are not. They are in the same room, often not three feet away, quite literally. Every nuance of expression or gesture or intonation becomes terrifyingly intimate. And also terrifyingly distant. The actors look directly at you and do not see that you are there, because the past that they are enacting has become more real than any present could. And yet we, the audience, are constantly reminded of present time. We are ushered in and out of the different upstairs rooms, at one time blindfolded and asked to touch material, directly spoken to, given tea. Willingly or not, we become as much a part of the performance as the ostensible ‘action’.

The four characters are the twin sister, wife, daughter and home help of the second owner of the house, one Vernon Jeffrey Pearce; and their personalities and motivations are revealed, not through any sequential narrative, but through short and heightened scenes that do not seem at first related. One figure lies in bed with a cricket bat; another hooks up her skirts to dance; the daughter puts on her father’s underwear; a figure crawls slowly up the stairs. But as these scenes unfold and coalesce, the audience is drawn towards some kind of insight: how fragile, perhaps, the surfaces of family life, how deep the hurts inflicted by the generations, how easily the ostensible civilisation of ‘home’ and ‘family’ can descend into personal horror and nightmare. Yet these are not ‘themes’ portentously announced by the performance. Rather, they are hints and intimations, as past is elided with present, reality with fictiveness, Sylvia Vickers’ actual upstairs with the same physical upstairs that the earlier family inhabited.

Get Up Those Stairs was performed nine times during the Brighton Festival of May 2004. I saw the first of these; and it says something for the professionalism of Wired that this ‘first night’ was acted with total assurance and skill. Almost always in such first performances, hesitancies are evident; but this was a fluent and compelling staging. A comment made later by one of those present is worth recording: ‘I didn’t understand all of it, but for days afterwards I found myself thinking about it’. In the Festival of 2003, Sylvia Vickers’ performance art took place in the ground floor of her house; in 2004 in the upstairs. The telling success of these two plays should surely point towards the mounting of a final play in a trilogy, to be presented in 2005.