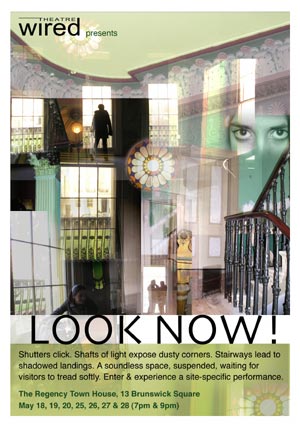 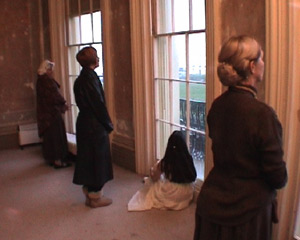 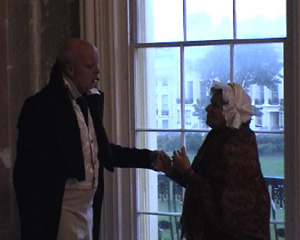 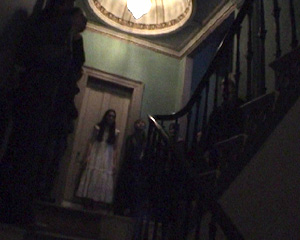 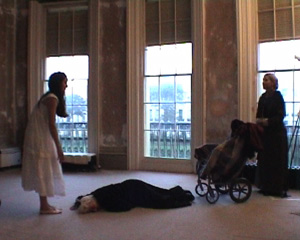 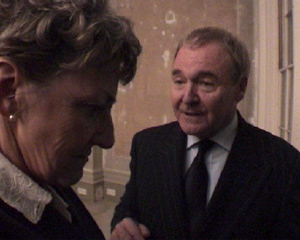 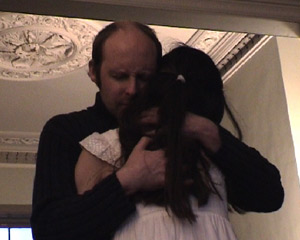 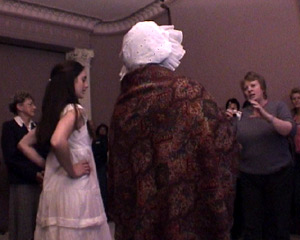 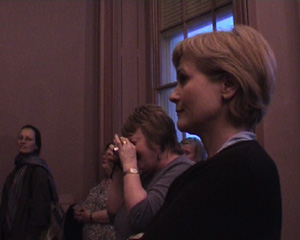 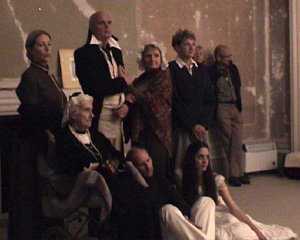 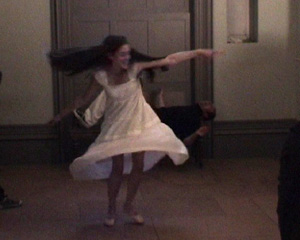 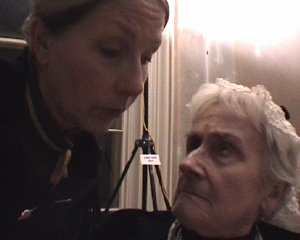 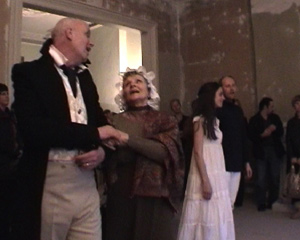 LOOK NOW! A photographer, a producer, a model and a supporting cast wait in the Regency Town House. Others are expected. The walls are bare, but the sun streams through curtainless windows revealing faded colours from the past. The house, with its tall stairways and empty rooms is the subject of a photo-shoot to celebrate 170 years since it was built. The audience is invited to experience the project as it evolves, but despite the plans of the photographer and the producer the actors seem to be controlled by some other force that inhabits the house.

The performance reflects the experience that Wired Theatre encountered during the making of this site-specific piece, notably that the Regency Town House contains a presence which is mysterious yet vitally human, conjuring the layers of lives that have crossed the threshold and left a fragment of their history behind. Who opened the door? Why did she laugh? How did it end?

Wired Theatre explores and creates its performances in unusual spaces and its latest contribution to the Brighton Fringe Festival took place in a Regency Town House Trust so that, without furniture and in rather dim light, wall paper, ceilings, mouldings, cornices, coloured fanlight, chandeliers, banisters, stairways and rooms looked shabby on first entrance and did not immediately offer the attractive setting an audience conventially expects.

The presence of furniture and time specific props such as clocks and candles would have helped to create a period amosphere – had the intention been to create a naturalistic play set in Regency times. They would also have provided inspiration for a company which creates a play around a particular space.

Wired Theatre, however, has broader intentions. The absence of furniture offered a number of differently shaped spaces in and between which the twenty or so (maximum) audience, together with the actors, could move easily. Then the actors, dressed in different period costume, became the centre of interest and attraction and performed what might have happened, and who the occupants might have been, over the period since the house was built. Thus the actors aimed to create a sense of the passage of moments in time and one silent figure, shawled in black, accompanied each scene.

To introduce the ‘performance’, however, a ‘director’ staged a rehearsal for a notional documentary about the house, along with a ‘photographer’ whose high flown description of her intentions conflicted with the director’s and bored the actors.

Pirandellian humour was further provided when the actors appeared scarcely enchanted by the undemanding tableaux and set pieces the photographer required – hands sticking out of doorways, for example, made, they obviously felt, little use of their talents. The tableaux, of course, as standard ingredients of nineteenth century farce, contributed to the humour and were then used as standard elements of melodrama relating to possible past events involving relations between master and servant, master/husband and wife, parent and child, ranging from 1830 through 1890 to 1940 and the 1960s.

A masterful and sinister regency buck treats wife and servants execrably; an irritable old lady is tipped out of a Victorian bath chair; an elderly but amorous 1940’s couple discuss buying the house; hippies play a pastoral scene from The Merchant of Venice and quote Marlowe’s famous pastoral poem; ‘Come live with me and be my love’ (with Raleigh’s famous reply on the subject of time implied in the silences).

In all of this the central figure of a girl in white plays the parts of servant, child, lover (Jessica in The Merchant) and so on. The spaces echo; long silences are held; the simple dialogue left suggestions which filled both space and silence.

At the end a slide show invited the audience to imagine what the spaces might originally have been like and what they might become again. Bright lighting showed the furnishings in their beauty and demonstrated what the spectator had not carefully looked at. Cleverly the attractive family photo, with actors in full regalia, taken during the performance, ,was shown in sepia at the end, emphasizing the passage of time and the way photos taken in fun and joy take on a melancholy tone as time and people pass. This was a production which entertained and stimulated the imaginations of audiences prepared, as the Sunday night audience certainly was, to go along with it.