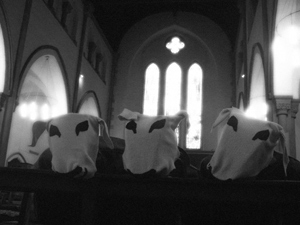 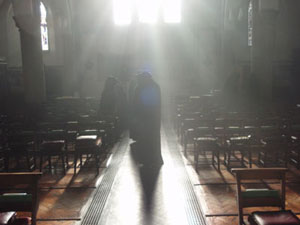 Following the successful collaboration with The Regency Town House Trust (2007/8), Wired Theatre was invited to make a performance in St. Barnabas’ Church, Hove. Inspired by the soaring arches and the sunlight lingering on tiled floors, and excited by local myths and customs of early religious beliefs, the group devised Miraculous Mummers’ Double Bill – two contrasting pieces which highlight Pagan and Christian attitudes and practices in the rumbustious style of the Festive Mummers’ plays of the Anglo-Saxon period.

Dark shadows are cast through the church, evoking the evil in man. Terrible tales are told of a tyrannical king. But nothing can blot out the light for long…..Riddles are solved, runes are cast. The players challenge and celebrate the ecclesiastical space in “tragical comical” style.

This piece continued the company’s commitment to making performances in non-theatricalspaces. Other works for the Festival include LOOK NOW (2007), LIKE CAGED BIRDS (2008), PARK PLAY, GONE BUT NOT FORGOTTEN (2006), AH YESTERDAY (2005), GET UP THOSE STAIRS (2004) maybemurder(2003).

A House In Your Name, The Journey of St Cuthman, was first performed in October 2008 to celebrate 125 years of Saint Barnabas’ Church at Poets Corner.