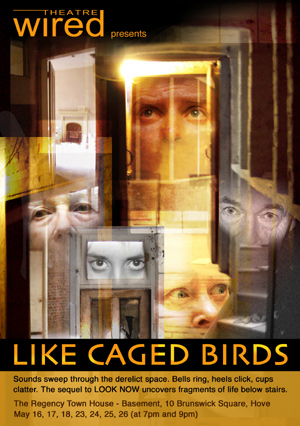 Working in collaboration with the Regency Town House trust the performance, was a sequel to Look Now (Brighton Festival May 2007). This was staged in the basement of 10 Brunswick Square, Hove and explored the space inhabited by the servant class in the Nineteenth Century.

The passage is lit by a naked light bulb. The signs on the doors – Housekeeper’s Room, Wine cellar, Butler’s Pantry, Meat Safe, Kitchen – indicate working lives. But the doors are shut, the wine cellar is empty, the dust has settled: only the sea gulls continue to beat their wings against the glass-roofed kitchen, their angry cries echoing through the deserted rooms. This is the setting for WIRED THEATRE’S latest site-specific performance, LIKE CAGED BIRDS. It is inspired by the diary of William Tayler, footman, who wrote:

“A servant is like a bird in a cage, deprived of the benefit of air”.

The audience is invited to view the cage, see the doors open, hear the voices raised, the footsteps shuffle and perhaps uncover some secrets of the servants
who worked below stairs two hundred and seventy years ago. A sequel to last year’s work LOOK NOW!, this piece continues the company’s commitment to making performances in non-theatrical spaces. Other works for the Festival include PARK PLAY, GONE BUT NOT FORGOTTEN (2006), AH YESTERDAY (2005), GET UP THOSE STAIRS (2004), Maybemurder (2003).

Many thanks to Nick Tyson and The Regency Town House Trust (please visit rth.org.uk for more information)
and to supporters: