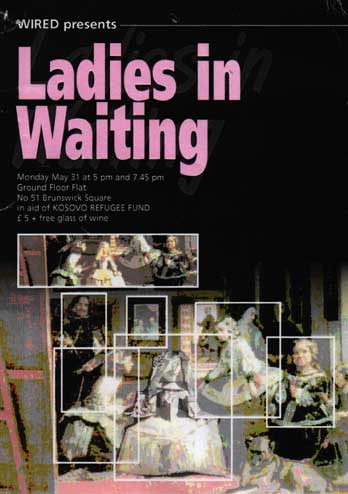 Ladies In Waiting was inspired by Valasquez’ painting, Las Meninas and Picasso’s numerous studies of this work as well as the following texts:-

The Birthday of the Infanta by Oscar Wilde, The Mirror by Sylvia Plath, The Order of Things, Las Meninas by Michel Foucault, The Battle of La Panto G.K. Chesterton and The Success and Failure of Picasso by John Berger.

The place chosen for this production was a town house (and it was performed in both Brunswick Square & Belgrave House). In such surroundings, the spatial configuration of performer and viewer juxtaposed with the prints of the paintings, raised questions about contemporary perspectives on the function of frames and boundaries. Historical representations of Kingship, paring and familial identities in Sixteenth Century Spanish Court were also explored in this piece.